Pandemonium in Delta hospital as four babies died over negligence

by sunreporters
in Featured, Health, News
0

By Paul Ola-Sapele
The doctor said there was nothing he could do – Mr Ikeji
Fear on Friday morning gripped patients including visitors after four newborn babies were said to have suffered neonatal death at the Central General Hospital, in Sapele, Delta state minutes after delivery.
Relatives of the bereaved mothers told Sunreporters that the women due for delivery that night (Thursday night/Friday morning) all lost their babies at the labour ward.
Patients, relatives and visitors in the hospital on Friday morning took to the premises protesting the hospital negligence and demanding government should intervene and investigation into the death of the infants.
“Mr Benjamin Ikeji, One of the bereaved women’s brother told our reporter that his sister’s husband brought his pregnant wife to the hospital at about 5pm on Thursday evening.
“when we brought her the doctor told us my sister was not in labour yet and I waited till 10pm in the night before going home, I called my sister this early morning, and she told me that the baby was stuck and the nurses told her that they could not do anything that the doctor was not around and when I came this morning  I met the doctor who told me there was nothing she could do since there was no light.
“I bought fuel for them and the next thing I heard was that my sister’s baby was dead ” he cried out adding that all the infants delivered that night had die One Mr Newton Oroba who said his wife lost her newborn after delivery at the labour ward in the hospital that night too, said the only doctor who was on duty last night was drunk “you could feel it from his breath when he came around 9pm yesterday and when he left, he did not return again”
He told reporters that when the nurses knew he was worried around 3pm, they told him they had called the doctor and he is not picking “only to tell me my baby was dead”
A nurse who crave anonymity claim that the number of newborn said to have died were not true “two died in their mother’s womb while two were still births, it was not the doctor’s fault” When probed further why doctor was not around to attend to these women, the nurse kept mum. 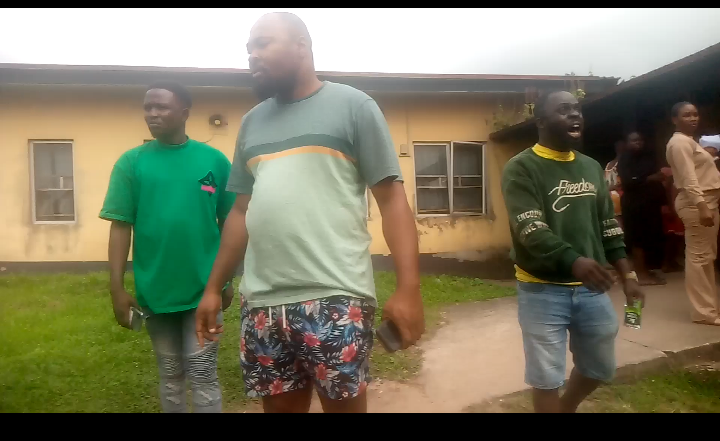 However Pandemonium broke out when, on sighting the said doctor in company of others , some patients and relatives of the bereaved confronted him demanding explanation for his absent that night, other medical workers on duty on sensing danger quickly took to their heels while the doctor said to be involved escaped into one of the rooms where he locked himself up.
The management of the hospital however drafted the Police and men of the Vigilante in at about 10pm to calm the protest, but, a lawyer who was invited by one of the bereaved husband said they would not let the issue lie low without taking action against the management of the hospital.
The lawyer who simply identified himself as Monday told Journalist that they will certainly hear from his client “the management of the hospital should explain why my client wife was left unattended to, an issue that led to the infant death, let us meet with them first” 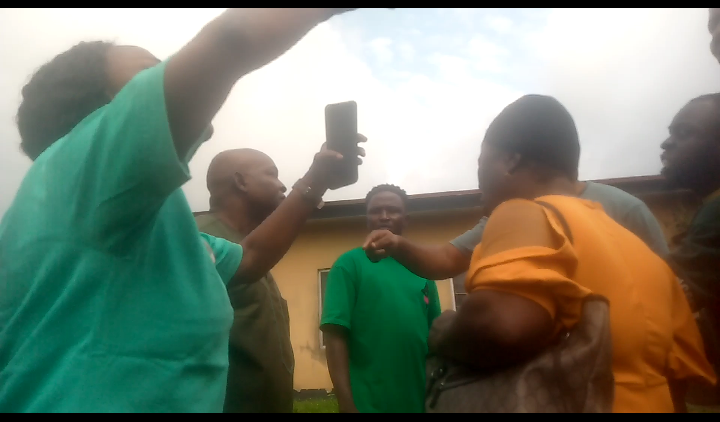 The development paralyzed activities on Friday morning with the hospital main gate firmly under key and lock while patients in other wards were left unattended to.
Some persons were seen
leaving the hospital with patients today “we are leaving, this is becoming too much and we are tired” one 46 years old Onofekowho James said, adding that the issue of negligence was now becoming a regular occurrence at the Sapele Central Hospital.
One of the patients told our reporter, Paul Olayemi that they collected #20,000 naira from her before they could treat her, insisting that most drugs meant to be distributed free were now being sold “when the last MD was here, he did not not allow this rubbish, now we are facing rubbish under this one” the patient who decline to mention her name said.
Journalists were yesterday chased out of the premises with some of the doctors threatening to beat up reporters who were making enquires and had attempt to take pictures “we will break your cameras and beat you up and nothing will happen” one of the doctors said, pushing a journalist violently while others hurled insult on them.
As at the time of filing this report, our reporter learnt that one of the lawyers had petition the hospital “my lawyer has petitioned the hospital management for negligence, this I can assure you” before turning down newsmen request to reach out to the lawyer and probably have a copy of the petition.
All efforts to get the respond to this story was met with brick wall, as the management has refused to comment on the issue, while Delta State commissioner for health could not be reached for his response.
Previous Post