The bill which has the Chairman, Assembly Committee on Public Accounts and Member Representing Ika North East, Mr. Anthony Emeke Elekeokwuri as lead sponsor, seeks to domesticate activities of the various anti corruption agencies in the country, including EFCC and ICPC. 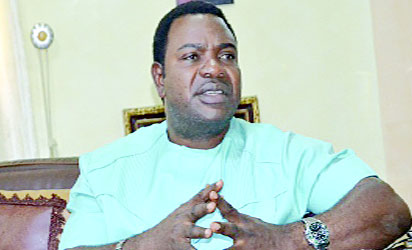 Hon. Anthony Elekeokwuri
Leading debates on the merits of the Bill, Hon Elekeokwuri, ran through almost all the clauses in the financial crime bill, saying that the proposed law is to deepen the process of accountability in governance as well as fight wasteful spendings in the system.
Elekeokwuri said the Good Governance and Accountability Commission, when established will entrench transparency, fight corruption, promote accountability, checkmate misappropriation of public funds, as well as place sanctions on erring officers of government or agencies in the state.
The Lawmaker who stated that Deltans have been yearning for the bill to check corruption for greater development in the state, explained that the Constitution of the Federal Republic of Nigeria gave the State Legislature powers to make laws for peace and good governance of the state.
The PAC Chairman emphasized that blocking leakages in the finances of the state would result to more money to carry out developmental programmes and projects by the state government, stressing that the proposed Law empowers the Commission to investigate activities of statutory institutions of government as well as receive complaints from Deltans.
According to Elekeokwuri, the bill when passed and signed into law will go a long way in helping to mitigate the prevalence of corruption in the State’s public and civil service, saying “we are not fighting anybody, rather, like the Bible says, “Righteousness exalts a nation, hence our efforts as lawmakers. If we don’t kill corruption, corruption will kill us”.
“Distinguished colleagues, I must emphasized that this bill will entrench accountability, transparency and good governance in the State. It will check corrupt practices in the State Public and Civil service, particularly misappropriation of Funds by the various Ministries, Departments and Agencies, MDAs, even the Delta State House of Assembly, Hon Elekeokwuri stated.
Referring to the various financial and audit laws as well as the Administration of Criminal Justice law earlier passed by the State Assembly, Hon Elekeokwuri maintained that the bill is to cap up all the integrity laws in the state to enhance transparency, accountability and good governance.
Speaking our reporter on Wednesday, Bar. Oghenejabo Ikimi bemoaned the bill and the alleged evil intentions of the lawmaker while calling on the leadership of Delta State House Assembly to discontinue the proposed bill, urging the lawmaker to sponsor people oriented bills and discontinue the Good Governance bill aimed at making Delta State Governement to make for a commission that would not produce results if finally passed into law.
Ikimi said if Elekeokwuri mean well for Deltans ans want to fight corruption, he should propose bill that would make corruption punishable by death sentence as being done in a civilized countries, like China, Japan among others.
Prominent Journalists in Delta State did not also spell Mr. Elekeokwuri on the propose bill, describing the bill as attempt by top political officials to witch-hunt perceived political enemies.
“Just as we are not ripe for State police because it was used during the first and second republic by political opponents, it was turned into an instrument of terror at that time by the political class, so also the State EFCC would be use by people in power to witch-hunt other.”
The Journalists cum publishers in a program ‘DOPF hangout’ monitored by this reporter, also described the propose bill as duplication of duties, arguing that the Lawmakers have powers to investigate, recommend for arrest alleged corrupt public officialls, wondered the rationale of Mr. Elekeokwuri at his level sponsor such needless bill.
” For me there is no need for the so called commission, rather the Honourable members should free themselves from the executives arm and their oversight abilities to bring about sanity in governance.”
The bill read on Tuesday, September 6th, 2022,  passed second reading on the floor of the State House of Assembly at the plenary of the House, presided over by the Deputy Speaker, Rt Hon Ochor Christopher Ochor, subsequently referred it to House committees on rules, business, legal and judiciary matters and special bills.
They are to report back to the House on Tuesday, 20th September 2023.
Contacted by our reporter, the lawmaker directed the reporter to get copy of the said bill which according him would answer all the questions pose to him by our reporter.
When our reporter requested for the soft copy of the bill for perusal, Mr. Elekeokwuri did not revert till the time of filing this report.
Previous Post